PDFs for Amy Ione’s Reviews of Biology in the Grid: Graphic Design and the Envisioning of Life and From Melies to New Media: Spectral Projection now online.

Jonathan Miller (1934-2019) was an English theatre and opera director, actor, author, television presenter, humorist and medical doctor. After training in medicine and specializing in neurology in the late 1950s, he came to prominence in the early 1960s in the comedy revue Beyond the Fringe with Peter Cook, Dudley Moore and Alan Bennett. He died 27 November 2019 at the age of 85. Obituary here.

At the age of 12, at the St. Paul’s School, his lifelong friendship with Dr. Oliver Sacks began. Indeed, the neurologist’s journey to international fame began when Mr. Miller showed the original manuscript of Dr. Sacks’s book “Awakenings” to a London publisher.

Another noteworthy interdisciplinary project was in 1983 with “States of Mind.” He interviewed the art historian Ernst Gombrich, the philosopher and scientist Daniel Dennett and others about consciousness and the brain.

Image-making, research and visual technologies have shaped each other over the past century and a half, argues Geoffrey Belknap, marking Nature’s anniversary. here

“Over the years, Nature adapted through its succession of editors, with, in recent decades, ‘sister’ journals carving out their own space in increasingly specialized scientific disciplines. Images remained central throughout. For instance, in 1896, Nature published physicist Wilhelm Röntgen’s first X-ray plates1; in the 1920s, maps to debate Alfred Wegener’s theory of continental drift2; and in 1968, the graphs that described astrophysicist Jocelyn Bell Burnell’s discovery of pulsars.” As I began Phillip Thurtle’s well-researched Biology in the Grid: Graphic Design and the Envisioning of Life, I wondered how his “envisioning of life” would intersect with the abundant evidence that a complex array of grids have served as a foundational element in art, architecture, and design production throughout history. A few examples that quickly come to mind include those used to construct perfectly proportioned Egyptian and Aztec temples, Islamic and Buddhist art, Chuck Close’s stylized portraits, and the layout of medieval illuminated manuscripts. Rosalind Krauss’ 1978 statement that the surfacing of the grid in early twentieth century modernist art was an announcement of “modern art’s will to silence, its hostility to literature, to narrative, to discourse” [1] is also a part of the grid litany, although one that gives a negative cast to how we use grids to engage with objects in our world.

As it turns out, Biology in the Grid moves along a markedly different track. Despite his integration of graphic design, the entertainment industry, advertising, and cultural theory, the book is largely orthogonal to the long art and design trajectory. Thurtle sees grids as a framework within a biopolitical circumstance and makes the point that “living in the grid’ does not equalize us because all lives are not treated similarly despite the seeming uniformity of the form. In his words: END_OF_DOCUMENT_TOKEN_TO_BE_REPLACED 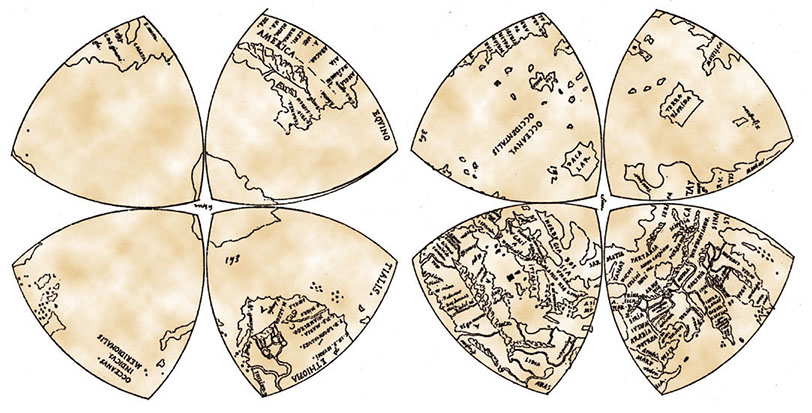 Abstract
In addition to his better known artistic, scientific and engineering talents, Leonardo da Vinci has an extensive reputation as a cartographer, drawing maps for a wide range of hydro-engineering projects for the rulers of Florence, Milan, Arezzo and the Vatican, amongst others. However, he is not generally acknowledged as authoring a world map (or mappamundi) spanning the globe, which was the domain of a few specialized cartographers of the era. Nevertheless, there is a world map among his papers in the Royal Library, Windsor, which has the correct overall configuration of the continents, including an ocean at the north pole and a continent at the south pole. Moreover, it has a unique cartographic projection onto eight spherical-geometry triangles that provide close to isometric projection throughout the globe.

This quincentennial anniversary year of his death in 1519 is an appropriate moment for a reappraisal of this contribution to global cartography. Although the authenticity of this world map has been questioned, there is an obscure page of his notebooks in the Codex Atlanticus containing a sketch of this precise form of global projection, tying him securely to its genesis. Moreover, the same notebook page contains sketches of eight other global projections known at that time (early C16th), from the Roman Ptolomaic conic section projection to Rossellli’s (1508) oval planispheric projection. This paper reassesses the dating of Da Vinci’s unique mappamundi to suggest that it predates that of Waldseemüller (1507), and may thus have been the first map to name both America and Florida. The Technical Delusion: Electronics, Power, Insanity by Jeffrey Sconce is a robust and multidimensional reminder of the complexity of human consciousness. Moving from Enlightenment studies of electricity and human anatomy to our 21st century digitally-connected globe, this interdisciplinary study asserts that delusions of electronic persecution have been a preeminent symptom of psychosis for over 200 years. One impressive feature of the study is how deftly Sconce weaves together case studies, literary source material, court cases, and popular media. Through this material he argues that we are moving toward an increasingly psychotic reality in which data practices will produce a world in which thought, reflection, and doubt will be disrupted by the very structures humans are putting in place. In his view, the current melding of big data and political power is creating a situation in which it is becoming more difficult to isolate precisely how (or perhaps where) bodies, the mind, electronics, and information intersect. He draws a parallel between psychotic disembodiment and electronic simulations:

END_OF_DOCUMENT_TOKEN_TO_BE_REPLACED

Mileva Marić confronts the challenges of disability and discrimination, love and fate, and her marriage to Albert Einstein. Based on actual events.
Time: Fall 1893.
Place: Zagreb, Croatia, Austro-Hungarian Empire

END_OF_DOCUMENT_TOKEN_TO_BE_REPLACED

This two-day interdisciplinary conference will be an important step toward building an international research network that focuses on the ways that race and biomedicine are mobilized beyond the lab in the 21st century. We seek to foreground how non-scientists are at the forefront of novel, plural, generative deployments of biomedical ideas of race that either entrench or resist historical ideas about race and its relation to biology across domains of environments, markets, and human rights.

Biomedical ideas of race have conventionally operated in two oppositional ways: notions of race as genetic or biological truth; and, conversely, accounts of health and health disparities as products of racism rather than caused by race itself. Debates about these opposing logics have never been completely cordoned off into domains of biomedical experts, but they are increasingly moving beyond the lab, and being deployed in diverse ways. Nonscientists are at the forefront of a range of deployments. On the one hand, biomedical ideas of race are being used by broader stakeholders to maintain historically entrenched ideas about race (e.g. pathologization of racialized groups to justify political repression and social service marginalization). On the other hand, biomedical ideas of race are also strategically mobilized in alternative directions, to stake claims and resist race-based injustice (e.g. identifying bodies in mass graves as racially indigenous in order to ground genocide claims in international courts).

END_OF_DOCUMENT_TOKEN_TO_BE_REPLACED

In the history of science, especially of the human and observational sciences, it has often been the case that knowledge-making activities drew upon many ‘voices’—accounts of a storm given by different observers; patient voices incorporated into a psychological case history; myths transcribed by an anthropologist. What many of these examples share is that the information provided by different voices takes narrative form in its own right. Yet scientists have also organised them into related groupings or broader narratives, as a way to elucidate particular research problems.

This workshop asks how narrative has helped scientists to configure extended chunks of information, and ultimately to manage a multiplicity of voices in their enquiry. Using case studies from across a range of fields, workshop participants explore the roles played by narrative forms of explanation both within and across the contributions of multiple voices to science. Of particular concern are the ways that narrative serves to order polyphonic material into a larger epistemic scheme, and reciprocally, how narrative valorises or suppresses particular voices, or indeed shapes what counts as a ‘voice’ at all.

For more information on the project, please see: www.narrative-science.org