The Emergent Aspect Dualism View of Quantum Physics:
A New Ontology That Resolves the Complementarity Conundrum 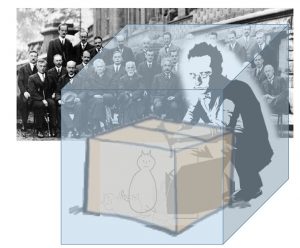 To resolve the conceptual problem of the conflict between quantal and relativistic formulations of Quantum Physics, this paper proposes a new conceptual ontology, Emergent Aspect Dualism, that reconceptualizes the foundations of the field. Emergent Aspect Dualism is a philosophical approach that starts from the assumption is that the primary ‘material’ of the universe is energy, which can be manifested as kinetic energy, potential energy or matter. The flow of such energy throughout the universe corresponds to the form described by the Schrödinger Equation (or more strictly the Hamilton-Jacobi equation that is its non-quantized counterpart). This is the classic monistic position, but in order to account for the hierarchy of levels of organization of the realities make up our familiar sciences, we need to invoke the concept of emergence, under which the operative principles of each level of organization of this energy are entirely dissociated from those of the levels below it. The key forms of emergence of relevance here are the emergence of the principles of biochemistry from those of quantum physics, and, crucially, the emergence of the properties of the conscious mind from those of the biochemistry of the brain. Since it is the conscious mind that develops the domain of scientific conceptualization as such, it is dualistically dissociated from the underlying biochemical principles of brain organization, but in a form that is organizationally emergent rather than inherently dualistic in the Cartesian sense. Emergent Aspect Dualism is thus a concatenated monism that incorporates a fundamental dualism engendered by the functional emergence of conscious processes from the energetic backdrop of non-conscious processes.