Complete Illustrated Edition of the Life of Leonardo da Vinci, from Lives of the Most Excellent Painters, Sculptors, and Architects by Giorgio Vasari.
Edited with complete illustrations and annotations by Christopher W. Tyler. Color illustrations throughout. This is the only edition of Vasari’s Life of da Vinci that illustrates every single painting and sculpture mentioned by Vasari. Translated by Gaston du C. De Vere (The Medici Society/Macmillan: London, 1912-1915).

Portraits of his Daughters by Thomas Gainsborough commemorates two delightful sisters painted by their father, the famous 18th century English painter Thomas Gainsborough (1727-1788). The daughters are buried together at St Mary’s Church, Hanwell. In 1809, the rector of the Church, George Henry Glass, built the Hanwell cottage where a fountain inscribed in memory of two sisters makes an interesting link with the Gainsborough daughters. Illustrations on every page.

Parallel Alices: Alice Through the Looking Glass of Eleanor of Aquitaine by Christopher Tyler. 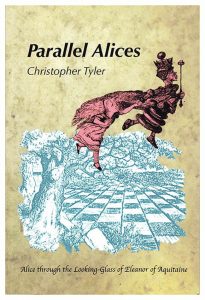 One of the best-loved and most scrutinized texts after Shakespeare and the Bible is the brace of Alice books, Adventures in Wonderland and Through the Looking-Glass, written for a pair of real Alices by the pseudonymous Lewis Carroll; it would seem implausible that there is any aspect of them left unexamined. Yet there is one large-scale motif running through the two books that has essentially escaped critical attention – the pervasive mediaeval theme. It is remarkable that there seem to have been no previous suggestions for the sources of what is really the main context of the Alice stories, the mediaeval temperament of many of the characters. Much has been made of the Victorian underpinnings of the tales, and they have been analyzed from an impressively diverse range of perspectives.

The present treatment attempts to correct this omission with an extended comparison of numerous aspects of the sequences of events to those of the 12th century royal courts, in particular.This book focuses on the remarkable parallels between the travails of the fictional Alice and a historical Alice who lived in the time of the knights and castles, duchesses and chess games that figure so largely in the narrative. This earlier Alice spent her life as a trading pawn of the Plantagenet and Capetian monarchs of England and France, a lost soul on the checkerboard of 12th Century territorial intrigues. She was a daughter of Louis VII of France named Alice of the Vexin, after an aptly eponymous territory that has been the site of struggles between the English and continental powers from the 10th to the 20th centuries. For much of her life Alice was held hostage by the Plantagenet court, successively held as a bargaining chip by Queen Eleanor and Kings Henry II, Richard the Lionheart and John. It must have been quite an education, and it seems that Lewis Carroll drew on many aspects of her story in his efforts to beguile the young Alice Liddell on their boat trips up and down the river from Oxford, the historical site where both Plantagenet princes were born.

About the Author: Christopher Tyler is an English visual neuroscientist based in San Francisco with extensive interests in the historical development of ideas. His scientific work is focused on the understanding of the human perception of the third dimension, but has ranged from the dynamics of color vision to the diagnosis of medical disorders of the visual system. He stumbled onto the issue of the parallel history of the Alice stories through an investigation of the role of women in the European intellectual lineage, such as the founding of universities. His publications include books (Computer Vision: From Surfaces to 3D Objects and Human Symmetry Perception and Its Computational Analysis) and over 100 articles on visual neuroscience, art and history. Tyler is also a well-known lecturer internationally, who has presented his interdisciplinary work at the World Science Fair, the Frist Art Museum, Cambridge University, and BBC Oxford. Among his achievements is the 1979 invention of the first “random-dot autostereogram,” popularly known as the “Magic Eye” after a publication using this invention spent a number of weeks on the New York Times Bestsellers list.

Visit the Parallal Alices webpage to learn more about the book.

Nature Exposed to Our Method of Questioning by Amy Ione (2002)