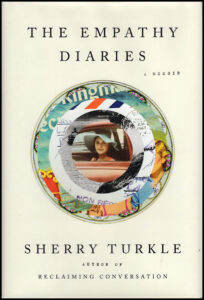 Sherry Turkle’s exemplary research on technology as it relates to humans, personal relationships, and children has provided key insights as the computer has ingrained itself in our world. While her early chronicles on innovative technologies were impressive, I felt that the more important contributions were her insights challenging the unbridled enthusiasm of innovative technologists and how technology often compromised privacy. This memoir—primarily devoted to her childhood. through tenure appointment years (1948-1985) — presents more details related to the person behind early works like The Second Self than the researcher who later pennedLife on the Screen,and Alone Together[1]. That said, the book does cogently capture how Turkle came to the interdisciplinary framework that has often set her apart. Or, as she puts it, “I found my life’s work by navigating as a bricoleur, trying one thing and stepping back, making new connections, and most of all, by listening” (p. 241).

The volume is divided into three parts. The first part introduces her from childhood to her early college experience (1948-1968). We discover that while she felt a part of her family as she grew up, she simultaneously developed the sense (and the clarity) of an outsider. Some of this came about because her mother believed that any “reality” could be claimed as real. Turkle therefore had to decipher how her mother was interpreting reality because her mother’s “facts” didn’t always conform with the world Turkle experienced.

By contrast, her biological father’s love of science made it easy for him to lose touch with the human needs of his family. Then, once her parents divorced, her mother’s second marriage created identity problems because her mother wanted Turkle to use her second husband’s last name even before she was legally adopted. The upshot of this was that Turkle grew up with two deep convictions: On the one hand, she felt something was wrong with her because of her name. In addition, she understood that four loving adults— her grandparents, her mother, and her Aunt Mildred— had made her the center of their lives. We also learn she was an exceptional student and intent on going to Radcliffe.

“I was focused on finally leaving home. But I had tried to take what I most admired: my aunt’s intelligence and integrity; my grandmother’s empathy and resourcefulness; my grandfather’s tenacity. As for my mother, I wanted her capacity for joy in small things, the energy she brought to every moment.” (p. 77)